In October 2018, we started to (strategically) litigate against rejections of family reunions under the Dublin III Regulation by the German Asylum Service (BAMF). In 2018, the rejection rate of so-called take charge requests from Greece to Germany increased significantly. Many rejections are unlawful and ignore the priority of the best interest of the child and the family unity principles.

The cases we litigate are both, our own cases from our offices in Athens and Chios, but also cases our partners and other Greek lawyers refer to us for the purpose of challenging rejections in family reunion procedures in German courts. Our litigation referral form can be found here.

On this page we summarize the positive court decisions in order to enable access to them for interested lawyers in Greece, Germany and elsewhere.

The case concerns a minor Syrian asylum seeker and her baby, which was born in Greece. Her mother and grandmother of her baby is legally residing in Germany. She arrived in Greece with her alleged husband, to whom she was forcibly married at the age of 15. Due to serious concerns regarding the child`s welfare, the minor was separated from her alleged husband before she gave birth to her baby. Greece sent a take charge request to Germany in order to reunify the minor and her baby with the mother resp. grandmother. Germany rejected the take charge request arguing, the baby could not be separated from his "father", though the man was neither recognized as father in Greece, nor interested in exercising parental care. These rejections are a gross violation of the priority of the child`s best interest and were obviously unlawful.

The court obliged Germany to accept the take charge request and thereby to enable the family reunion of the minor mother and her baby to her mother in Germany under Art. 8 Dublin III Regulation.

The court followed our argumentation and the existing jurisdiction by Administrative Court Berlin and concluded, that as long as the court proceedings in Germany concerning the father`s asylum claim are not concluded, he is still to be considered as an asylum applicant under Art. 10 Dublin III Regulation. The court therefore obliged Germany to accept the family reunion.

Greece then sent a take charge request for the minor in order to be reunified with his family in Germany. After some formal rejections, the request was finally rejected based on the fact, that the deadline for a take charge request under Art. 8 Dublin III Regulation has been expired and that there are no humanitarian reasons since the mother decided voluntarily to be separated from her son.

The court disagreed: in the light of the minor`s best interest, the circumstances of the family separation do not matter.The alleged "voluntary" separation - whose voluntariness the court doubts anyway - could not be in the minor's best interest, as he clearly did not want to be separated from his mother.

The case concerns a minor Afghan asylum seeker, who arrived with one brother in Greece, while his other adult brother resides in Germany and has been granted refugee status. The brother in Greece could not take care for the minor due to serious health problems and was neither practically nor legally responsible for the minor. To the contrary, the minor was hosted in structures for unaccompanied minors.

Later, Greece submitted positive DNA results clearly proving the family link between the minor and his brother in Germany. Germany still rejected the family reunion, since the DNA was submitted after the deadlines. Further, the German Dublin Unit argued, that the other brother in Greece could take care for the minor and that his medical condition did not prevent him from irregularly entering Greece, which would already show his ability to take care of the minor.

The court held the rejections unlawful: Germany should have already accepted the take charge request based on the various circumstantial evidence submitted in the first place, at least Germany should have accepted the family reunion upon submission of the DNA test. Lastly, the court clarified once more, that whether or not a minor is unaccompanied in Greece – which is a prerequisite for the applicability of Art. 8 Dublin III Regulation - is to be assessed in accordance with Greek law and thus the minor is unaccompanied.

The case concerns an Afghan unaccompanied minor, whose (half) brother resides in Germany and is German citizen. After submission of several documents proving the family bindings – Tazkira of the minor and marriage certificate of the brother indicating the same father`s name as well as photos and individual statements – the take charge request was rejected, since the family binding was doubted and arguing, that the Dublin III Regulation does not apply to family reunification to German citizens – which is a completely absurd interpretation.

The court made clear that in order to reunify unaccompanied minors to their relatives under Art. 8 Dublin III Regulation, it is sufficient that the relative is legally present in the other member state and that German citizens are indeed legally present in Germany.

The court further held that the documents handed in sufficiently prove the family link between the brothers and obliged Germany to accept the family reunion.

The case concerned a minor Syrian applicant, whose sister is residing in Germany as beneficiary of subsidiary protection. The take charge request under Art. 8 Dublin III Regulation was submitted after the required three months deadline from Greece to Germany, which was why Germany had rejected the take charge request.

The court held that indeed Art. 8 Dublin III Regulation was not applicable anymore due to the delayed submission of the take charge. However, due to the circumstances of the case – the fact that the minor was unaccompanied in Greece and had a close relation to his adult sister – Germany had to accept the family reunion under the discretionary clause (Art. 17 para 2 Dublin III Regulation). 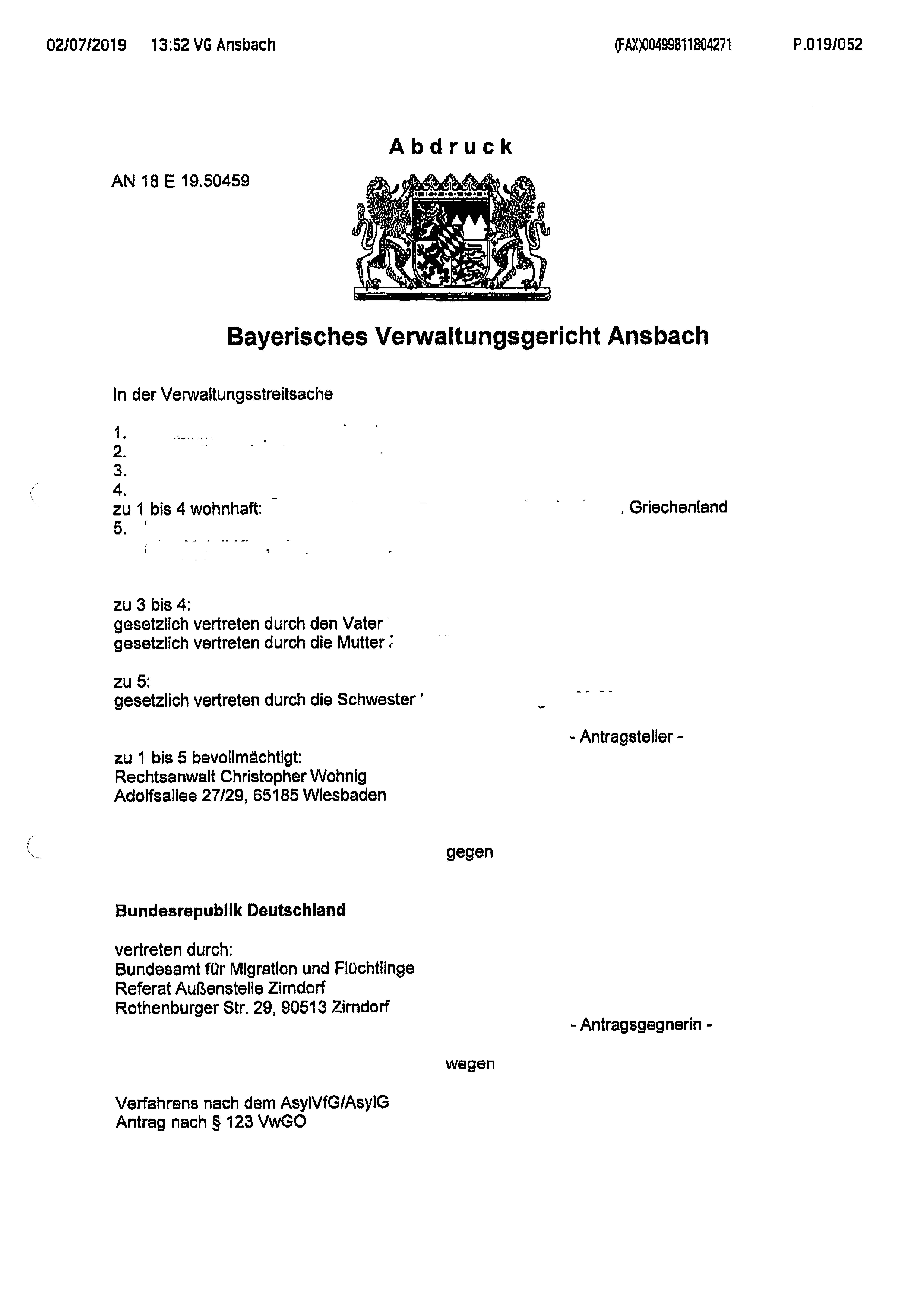 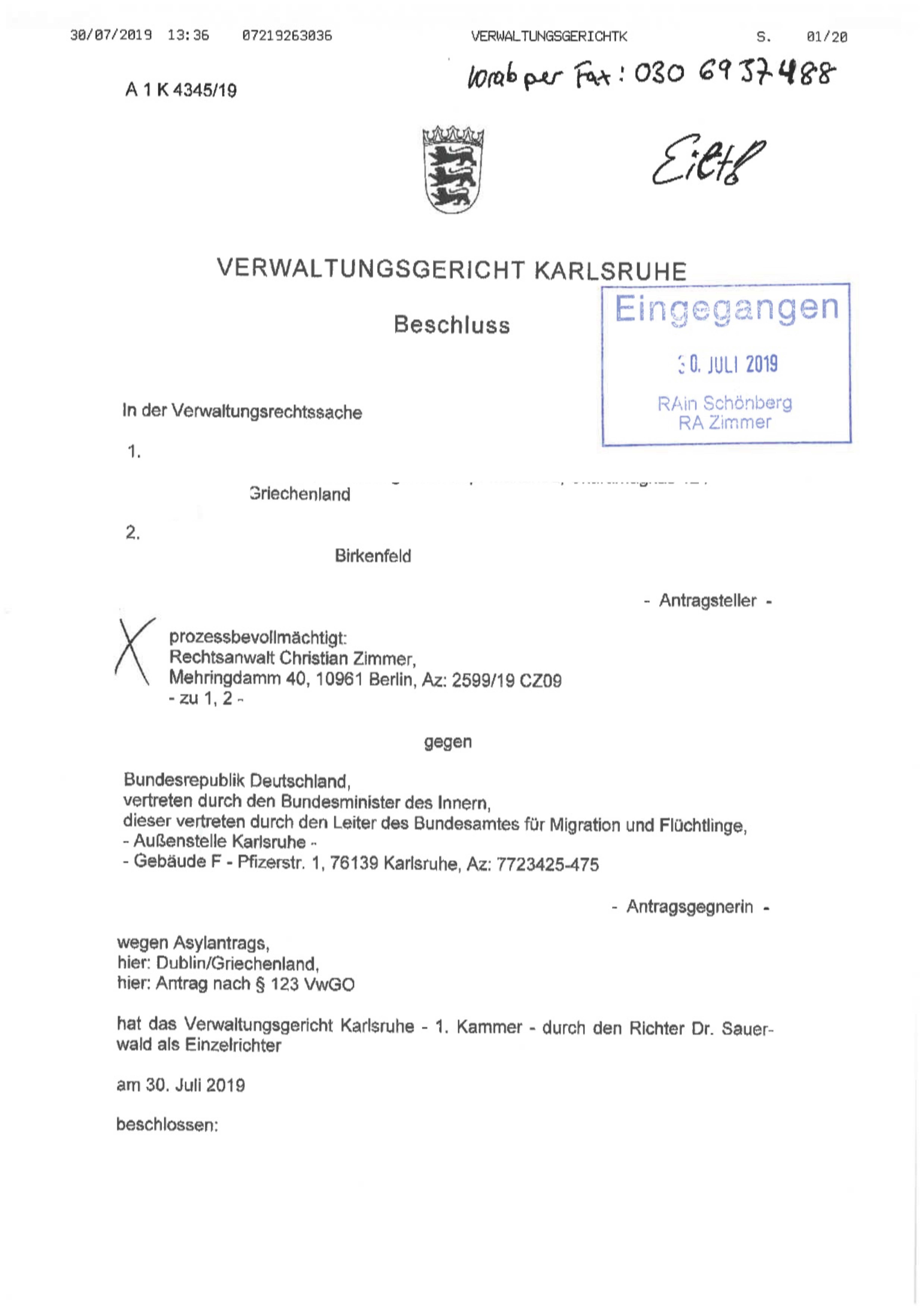 The case concerns a Syrian applicant, whose wife resides in Germany as beneficiary of subsidiary protection. The Greek Dublin Unit submitted the wife`s written consent alongside with the take charge request under Art. 9 Dublin III Regulation. However, German Dublin Unit sent a letter to the wife, asking whether she consents with the family reunification. Initially, the wife did not receive the letter, since she had moved. Germany rejected the take charge request based on the fact that the wife had not answered the letter. Within the re-examination procedure, the wife submitted her consent twice to the German Dublin Unit, however, Germany rejected the case again.

The court found the rejection purely formal, since the consent was submitted with the initial take charge request and therefore assumes that Germany became responsible for the asylum application as of 10.03.2019 of the husband due to acceptance by default under Art. 22 (7) (cf. ECJ, judgement of 13 November 2018 - C-47/17, C-48/17, para. 67). The judge obliged Germany to accept the take charge request and further to work towards the husband`s transfer within six months after the acceptance by default came into effect, so until 10 September 2019. Only due to additional court proceedings (“enforcement proceedings”), the German Dublin Unit implemented the court decision and the applicant was successfully transferred in time to his wife in Germany. 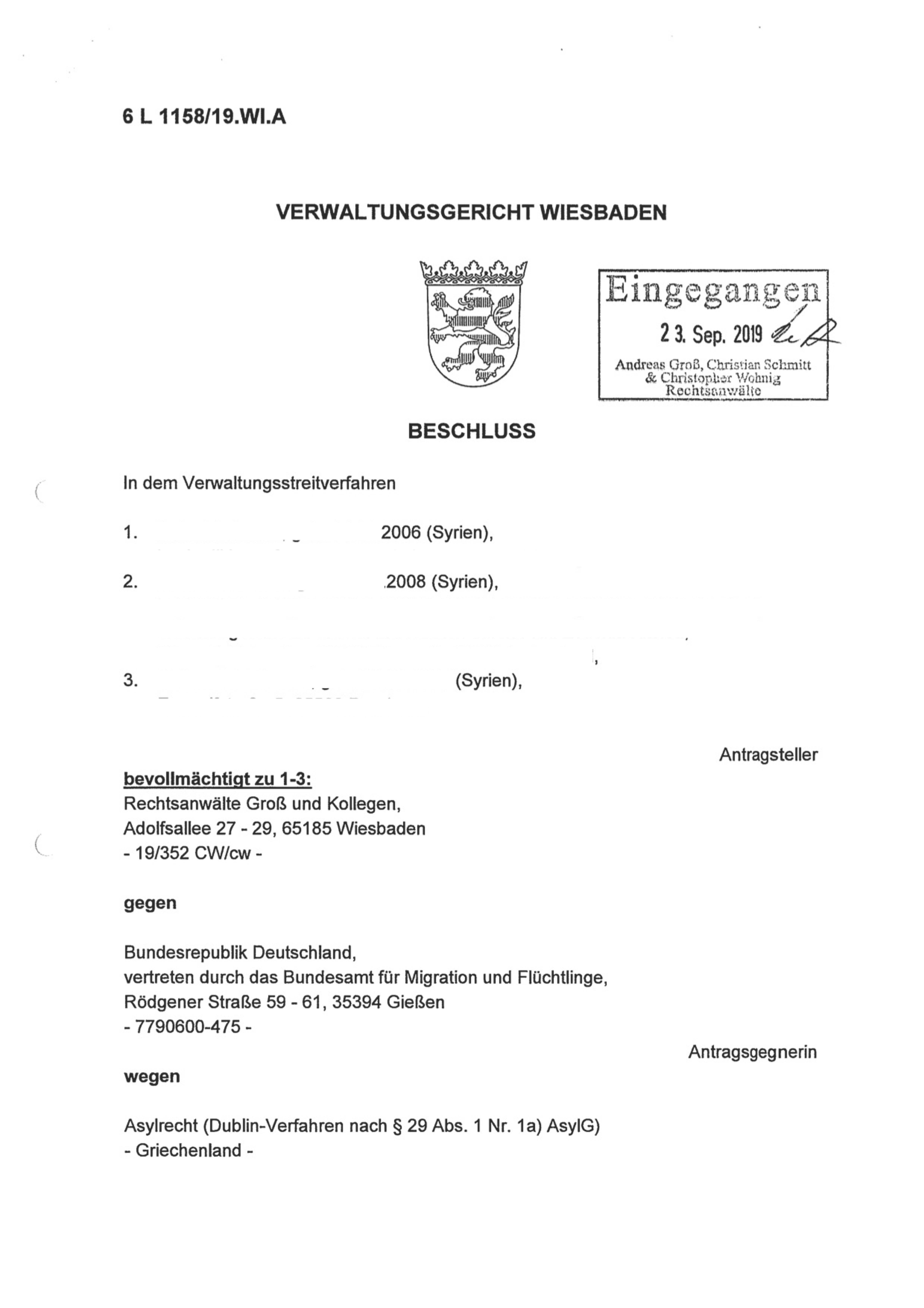